Capital Rotary Club member Tony Thompson (right in photo) is congratulated by president Philip Flynn after receiving a District 7770 Leadership Award for fundraising to support the CART (Coins for Alzheimer’s Research Trust) Fund.  Thompson organized a gala celebration last August that resulted in donations of more than $15,000 – all monies earmarked for cutting edge, high-impact research aimed at preventing or finding a cure for Alzheimer’s disease.  The CART initiative began in South Carolina over 20 years ago and has since been adopted by Rotary clubs throughout the United States.  The district award lauded Thompson’s “dedication to impactful actions and meaningful service to the Columbia community.”  He has been a member of Capital Rotary since September 2001. 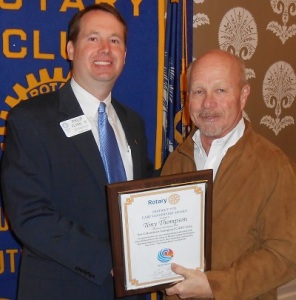