Capital Rotary marked the 2020 observance of World Polio Day on Oct. 24 with a Purple Pinkie Polio Power video – a special online project to promote awareness about polio and about End Polio Now, an ongoing international campaign to eradicate the disease through mass immunization.  Clubs in District 7770 were encouraged to produce videos and post them.  The district is made up of about 80 clubs and 5,000 Rotarians in 25 eastern counties of the state.  Capital Rotary’s video was recorded by club member Sean Powers, narrated by immediate past president Abby Naas and edited by Blake DuBose, who served as president in 2017-2018.  The video was scripted by public relations chairman Pete Pillow.  It can be viewed on Capital Rotary’s Facebook page.  World Polio Day is an annual event that honors the late Dr. Jonas Salk – developer of one of the first successful polio vaccines.

The coronavirus impact on South Carolina’s economic development is a mixed bag of good news, bad news and future unknowns, according to Megan Anderson (in photo), a global business project manager for Maxis Advisors and Capital Rotary’s Aug. 12 guest speaker.  Despite the disease, Anderson says business prognosticators are “fairly positive” about job growth, increased capital and additional investment by both foreign and domestic firms.  Good news includes: (1) companies aren’t “timid or worried” about the “new normal” of living with COVID-19; (2) firms have done their preliminary work and are ready to “pull the trigger whenever they feel it’s a safe time” for “rapid release of investment”; (3) emerging markets are likely in fields such as personal protective equipment and sanitation products; (4) pandemic-related job losses could be offset by these new industries’ need for workers; and (5) South Carolina has an inventory of available buildings and land for business sites.   Bad news incudes: (1) stress caused by tax breaks or financial incentives tied to performance measures that companies now can’t meet; (2) a negative overseas perception of Americans as people who “can’t follow the rules” for face masks and social distancing; and (3) worries about worker safety and managing staff furloughs.  Unknown economic factors include: (1) how working remotely will impact the need for and cost-effectiveness of buildings/offices; and (2) the future sustainability of new technologies and “the COVID-19 lifestyle” caused by the pandemic’s duration.  Before joining Maxis Advisors, Anderson was a manager at the SC Department of Commerce. She has master’s and bachelor’s degrees in international business from the University of South Carolina.

Capital Rotary announced new Paul Harris Fellow honors and elected its slate of 2020-2021 officers and directors during a Zoom meeting on June 17.  Neda Beal (in photo) was cited for her continuing donations to the Rotary Foundation in support of world understanding and peace programs. She is now a Paul Harris Fellow Plus-Six giver (signifying an initial $1,000 donation with six additional gifts at the same amount).  Paul Harris Fellow recognition memorializes the Chicago attorney who helped found Rotary International in 1905.  A Capital board member for several years, Beal was named club Rotarian of the Year in 2016.

Columbia Metropolitan Airport (CAE) boasts a refreshed look, feel and direction while trying to build on a 24% growth in passenger traffic since 2018.  That’s the message Capital Rotarians heard March 11 from guest speakers (left to right in photo) Kim Jamieson and Mike Gula.  Jamieson heads marketing and air services development, while Gula has been the aviation facility’s executive director for six years.  They said CAE’s customers are 70% business fliers, 20% college, government or military passengers, and 10% family-based travelers.  To compete with larger airports in Charleston, Charlotte and Savannah, CAE emphasizes a “fly with ease” theme of comfort and convenience.  Gula said 91% of passengers move from the terminal’s entrance to security screening stations within five minutes.  CAE also has local pride of ownership.  Along with businesses operating on its campus, the airport generates over 1,800 fulltime jobs, more than $80 million in labor income and $535 million in economic output in South Carolina.  CAE handles over 132 million pounds of cargo each year as a regional hub for UPS Airlines – the world’s third-largest airfreight operation.  Gula said strong local support allows the airport to work for bigger planes, new air service and better fares.

Capital Rotarian Le Frye (left in photo) was recognized as a new Paul Harris Fellow by club president Abby Naas at the Feb. 26 meeting.  The honor – named for the Chicago attorney who founded Rotary International in 1905 – acknowledges individuals who contribute $1,000 to the humanitarian organization’s charitable foundation in support of programs for world understanding and peace.  A South Carolina native, Frye holds a bachelor’s degree in Journalism and Mass Communication from the University of South Carolina.  She has nearly 20 years of experience in planning, managing, and executing various aspects of political and advocacy campaigns, working with elected officials both in the SC State House as well as Congress.  Frye joined Capital Rotary in February of 2019. 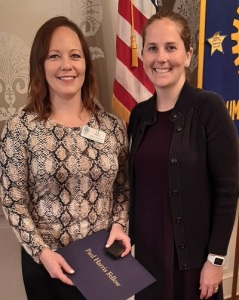 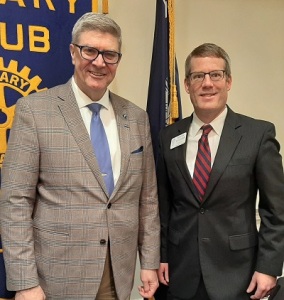 Local clubs are the “heartbeat” of Rotary International, but need training to grow stronger and more effectively serve their communities.  That’s the message Capital Rotarians heard Nov. 20 from guest speaker Tom Ledbetter (shown with Capital member Neda Beal), head of District 7770’s Rotary Leadership Institute programs.  The institute is a learning experience consisting of separate sessions in three parts: (1) exploring Rotary’s roots, engaging members and creating service projects; (2) strategic planning, team building and attracting members; and (3) public relations, effective leadership strategies and club communications.  Developing leaders is key for service clubs to get and retain younger members.  Ledbetter said District 7770’s Rotarians average 58 years old.  “Aging out” impacts a club’s ability to conduct events and projects that advance the goal of “service above self.”  Noting that “it’s not your father’s Rotary anymore,” Ledbetter said persons ages 25-45 must be engaged in worthwhile activities before they’re willing to make a commitment.  He believes Leadership Institute training would benefit every new Rotarian in his or her first two years of membership.  Ledbetter is a charter member and past president of the West Metro-West Columbia club and is associate vice provost with the Center for Entrepreneurship and Educational Support at Midlands Technical College.

Capital Rotary past president Blake Dubose (standing at right in back row) and his team of club members delivered new paperback dictionaries to third-grade students at Gadsden Elementary recently.  For 15 years Capital Rotary has donated the free books to 12 Richland District One grade schools as part of the Dictionary Project – an effort begun by a non-profit organization in Charleston in 1995 to help young people become good writers, active readers, creative thinkers and resourceful learners.  Locally, the Rotarians have given out more than 14,000 dictionaries over the years, while a number of other clubs in South Carolina and throughout the country also are Dictionary Project sponsors.  One of Rotary International’s worldwide goals is improving basic education and literacy for adults and young people. 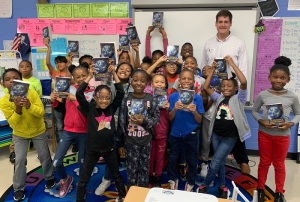 Organ, eye and tissue donations from a deceased loved one not only improve and save lives, but also offer hope and healing for donors’ grieving families.  That’s the message Capital Rotarians heard Aug. 28 from We Are Sharing Hope SC, the state’s only organ procurement organization.  Guest speakers Pamela Eyring (left in photo) and Kristine Neal came to talk about “donor heroes” who make possible the success of transplant recipients.  Eyring – whose son was a tissue donor after an untimely death – said his legacy lives on in more than 300 people whose lives were touched by his gift.  Neal is communications director for We Are Sharing Hope SC.  She said 472 lives were saved in the state in 2018 by 181 organ donors and 292 tissue donors; a total of 550 organs were transplanted.  But she noted that over 113,000 people are on the national transplant waiting list – more than 1,100 in the Palmetto State – and 22 people die daily while waiting.  Any person of any age or with any medical history can register as an organ donor at no cost.  All major religions support organ donation, Neal said, adding that although 95% of people say they support the idea, only about half are registered donors.  We Are Sharing Hope SC focuses on educating the public about the importance that a “yes” to organ donation can make. 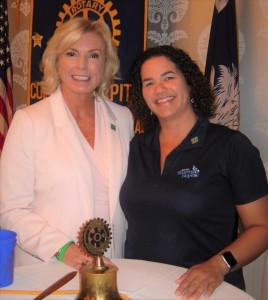 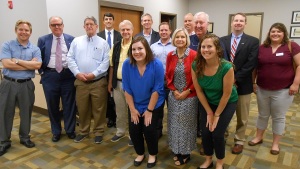