Capital Rotarians have given a helping hand to a local family and to a local charity as part of the club’s commitment to community service, according to president Philip Flynn.  The family assistance helped Tameika and Jerome Smith and their six children relocate after being displaced from Allen Benedict Court in January due to dangerous gas leaks.  The Smiths had to leave their possessions behind and were in temporary housing until moving into a new apartment in May.  Club members donated time, money and household items – including furniture, kitchenware, bedding and clothing – so the Smiths could get back on their feet and set up house again.  Flynn said Mrs. Smith (at new home’s door in photo) wanted to convey how much the family appreciates Capital Rotary’s support and contributions.  He told the club that Mrs. Smith said: “Everything you did is a blessing!”  Help for the local charity came as a result of the club’s touring Columbia’s Ronald McDonald House on May 29.  The facility needs new signage to better mark its location.  Capital Rotarians have raised over $1,000 toward a goal of $1,200 for this purchase.  Flynn said he’s confident the goal will be met.  “We know the Ronald McDonald House provides a tremendous resource for families needing lodging, food and fellowship while their children receive the healthcare they need,” Flynn added. 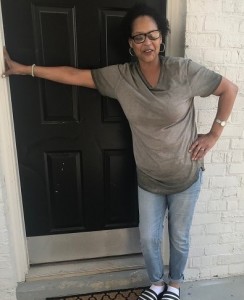