Capital Rotary president Abby Naas (left in photo) recognized Philip Flynn and Katherine Anderson on March 4 for their continuing support of The Rotary Foundation, the international service club’s charitable arm that funds programs for world understanding and peace.  Flynn was named a Paul Harris Fellow plus-one donor, representing an initial $1,000 donation, plus another of $1,000; Anderson is a plus-two Fellow with an initial $1,000 donation followed by two more for $1,000 each.  Flynn is Capital Rotary’s immediate past president.  Anderson has been a club member since March 2009. 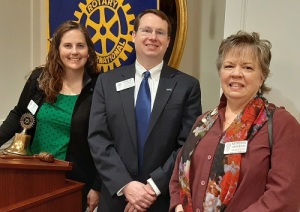