Just like CPR can assist a person who’s having a heart attack, mental health first aid is emergency care for those with panic attacks, anxiety, depression or even suicidal thoughts.  Given today’s stressful times, emotional well-being is more important than ever, according to counselor Kandy Hirsch (in photo), guest speaker for Capital Rotary’s Nov. 4 Zoom meeting.  She said about 1 in 5 persons face a mental health challenge in any given year, but less than half will seek help, primarily because of the stigma associated with psychiatric problems.  Mental health first-aiders can offer comfort in an action plan that: (1) approaches and assesses for risk of suicide; (2) listens nonjudgmentally; (3) gives reassurance and information; (4) encourages appropriate professional help; and (5) encourages self-help and other support strategies.  Hirsch said the mental health first aid movement began in Australia about 20 years ago and came to the U.S. in 2008.  To date, more than 2.5 million people in communities across the country have been trained in the program through a network of 20,000 certified instructors like her.  Mental health first aid teaches about recovery and resiliency – the belief that individuals experiencing these challenges can and do get better, and can use their strengths to stay well.  Hirsch suggested these self-help steps for anyone feeling “on edge” currently:

Columbia’s greenway parks trace their heritage back to a 1905 beautification plan and still provide scenic vistas for hospitality, outreach, education and recreation.  That’s according to Karen Kustafik (shown in LinkedIn photo), assistant superintendent of the city’s 31 Park Rangers and Capital Rotary’s Sept. 9 guest speaker.  The Rangers oversee eight parks that have opened since 1983 and are looking forward to adding new facilities in the Bull Street area (2020) and a Saluda Riverwalk and Boyd Island bird sanctuary (2021).  Riverfront parks recall a bygone era when waterways were key for commerce, moving produce and raw goods from the Upstate and Midlands down to Charleston and back.  Today, Kustafik said, parks remain “really good things to have in flood plains because rivers will rise.  In a changing climate, rivers seem to rise a little bit more frequently, so the banks of green spaces along waterways help keep us more resilient.”  Insect life thrives in wild places, becoming what Kustafik called “building blocks for the rest of life – these insects are critically important” in the natural food chain and as pollinators for plant reproduction.  She also praised the sense of quiet reflection that parks provide.  “Yes, we live in an urban area, but if you get a good 10- or 15-minute walk in, you can find solitude and a place to reflect,” Kustafik observed.  “We have some gorgeous spots where everybody can find peace.”  This has been true even during the COVID-19 pandemic, she noted, when local parks remained busy in March and April despite being officially shut down.

Columbia’s Capital Rotary began its 2020-2021 year July 1 by inducting a new president, saluting the Rotarian of the Year and announcing Paul Harris Fellow honors in a biweekly Zoom session.  Capital’s new president is Ben Carlton (in photo), a member since 2015, who practices corporate law with the Columbia firm of Richardson, Plowden & Robinson.  Carlton is a graduate of North Carolina State University and the University of South Carolina’s Law School.  He was a club director and secretary before serving as president-elect in the past year.  Earning Rotarian of the Year honors for the second time was Neda Beal (left in photo below with Sophia Bertrand of the University of South Carolina’s Rotaract Club).  Beal – cited in 2016 for her work with several projects – was recognized anew for serving as liaison to the student group.  Rotaract clubs are for adults ages 18-30 interested in community service, in developing leadership and professional skills, and who enjoy networking and social activities.  USC Rotaract formed in 2010-2011; Capital Rotary became its host in 2018-2019.  New Rotary Foundation donor honors went to Jack Williamson, Philip Flynn and Pete Pillow – all named Paul Harris Fellow Plus-Two givers (signifying an initial $1,000 donation with an additional gift in the same amount).  The Foundation is Rotary International’s charitable arm to support world understanding and peace programs.  Williamson, a former sergeant at arms, joined Capital Rotary in 2008, as did Flynn, a past president and current director.  Pillow joined in 2006 and was Rotarian of the Year in 2018.  The club is holding remote meetings currently in response to the coronavirus pandemic.

Capital Rotary members – unable to hold their weekly breakfast meetings at the Palmetto Club for the past seven weeks – held their first remote meeting via Zoom (as shown in photo) at 7:30 a.m. on May 6.  President Abby Naas said the digital decision was made because “it has been too long since we have seen each other,” and a time frame for resuming onsite meetings is not known at this point.  Nearly half the club joined the Zoom session, where donations of $1,100 each were announced to Harvest Hope Food Bank and to Senior Resources to assist in coronavirus relief efforts.  Rotarians also discussed how they’ve been able to work remotely during the pandemic and to help business clients applying for government loans and financial assistance.  Naas said the club plans to hold future Zoom meetings every other week and may even induct new members using the app.  She also shared contacts that might assist in getting hand sanitizer, disposable face masks and face shields for those needing personal protection equipment. 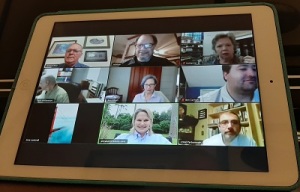 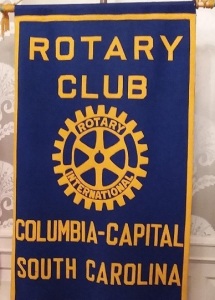 Capital Rotary members visited the University of South Carolina football field on Jan. 29, but they weren’t there to see Gamecocks on the gridiron.  Instead, nearly 30 Rotarians (shown in group photo) got a behind the scenes look at current amenities and details about coming improvements at Williams-Brice Stadium.  Zach Smeltzer of Gamecock Sports Properties led the way, starting upstairs in the press box, then moving down to premium seating areas and Champions Club suites, a Hall of Captains (portraits of team leaders through the years) and the postgame press conference room for coaches, players and media.  Smeltzer said renovations now under way will mean a better gameday experience for fans plus extra revenue.  The $22.5 million project includes: (1) The 2001 Club, a wedge-shaped section of open-air, suite-like seating  in a corner over the tunnel where the team takes the field and a club area beneath; (2) The South Club – an enclosed area underneath the south end zone seats; (3) The East Club – a new deck, more outdoor suites and an indoor club area; and (4) The West Club – a concourse club area near the top of the west lower deck.  Project design and planning took more than a year, according to the contractor. 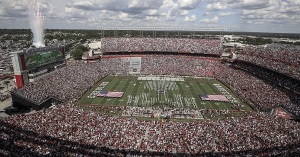 Capital Rotary Club members adopted a Columbia-area family and provided gifts for the holiday season (shown in photo) as part of the 2019 Midlands Families Helping Families Christmas program, a Palmetto Project and WIS-TV initiative.  Rotarians had the option of purchasing gifts or making a monetary donation.  For 27 years, Families Helping Families has helped ease the holiday burden for thousands, ensuring that more neighbors may share in the joys of Christmas.  The program had a goal of serving 3,500 families and senior citizens this year.  Recipients are referred by local social service organizations and schools. 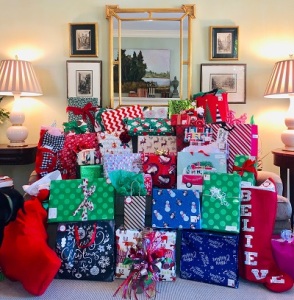 District 7770 Gov. Johnny Moore (right in photo) has honored Columbia’s Capital Rotary for 2018-2019 donations to The Rotary Foundation, the international service club’s charitable fund for programs promoting peace and world understanding.  Moore presented three recognition banners to immediate past president Philip Flynn.  These included (1) ranking in the Top Three Highest in Per Capital Annual Giving in the district; (2) achieving Every Rotarian, Every Year status – a minimum Annual Fund contribution of $100 per capita; and (3) becoming a 100% Foundation Giving Club with 100% participation by members plus $100 average per capita contributions.  Capital Rotary also was named a Three-Star Club for showing year-after-year Foundation support.  Moore – a member of Chapin Sunrise Rotary – is a former assistant area governor and membership chairman for District 7770 that comprises nearly 4,000 Rotarians in clubs across the 25 eastern counties of South Carolina. 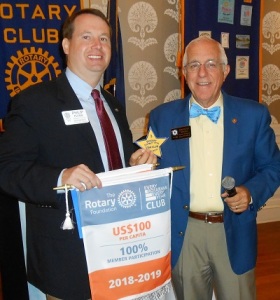 Columbia’s East Point Academy merges cultures, inspires minds and expands horizons for students by teaching them Mandarin Chinese, the world’s most spoken language.  In the process, East Point earned an “A” ranking as the state’s 2nd best public charter school, according to Mark Bounds (at left in photo with Rotarian Matthew Pollard).  Bounds was Capital Rotary’s Sept. 4 guest speaker, tracing the school’s growth to 740 students since its 2011 founding.  East Point practices language immersion – meaning that Mandarin Chinese is used extensively in academic classes schoolwide.  Mandarin is spoken by over a million people and is the second-fastest growing language globally.  South Carolina has an important China connection – Bounds said the country ranks 1st among the state’s export markets while Chinese companies employ over 3,500 of our residents.  East Point has classes from 4th grade kindergarten to 8th grade middle school and hopes to add high school instruction.  It offers extracurricular activities ranging from clubs to performing arts and sports.  As the first school of its kind in the Carolinas, East Point has inspired two more Chinese language immersion institutions.  “Together, our students, teachers, staff and parents make East Point Academy a great place to learn and grow,” Bounds said.  Before becoming East Point’s head of school, Bounds worked for Lexington-Richland School District Five and for the SC State Department of Education.  He served 20 years in the military prior to his education career. 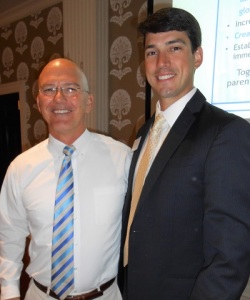 Navigating the Dept. of Veterans Affairs paperwork maze is daunting, but it can pay off for those willing to stake a claim for benefits due as a result of military service.  That’s according to Cristy Bradley of Elgin, Capital Rotary’s Aug. 7 guest speaker, who is a paralegal accredited as a claims agent by the federal agency to assist vets in need.  Bradley (shown in photo with Rotarian and Navy veteran Bob Davis) said only 90 days of service are needed to qualify for VA benefits that range from compensation to guaranteed home loans and from medical treatment to life insurance and burial assistance.  She noted that vets judged to be 30% or more disabled may be entitled to additional compensation for a spouse, dependent parents, unmarried children or a child incapable of self-support.  She said about half of VA disability claims involved posttraumatic stress disorder (PTSD).   Vets seeking benefits must have (1) a diagnosis of PTSD; (2) symptoms must be tied to a traumatic event, or “stressor,” that occurred during service; and (3) there must be documented medical evidence from a medical professional that the in-service stressor is what caused the individual’s PTSD. 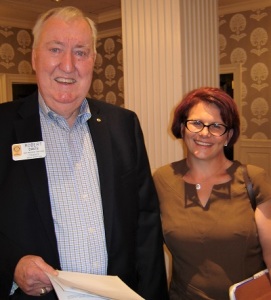