State treasurer Curtis Loftis touched on the highlights of his role as South Carolina’s “private banker” when he addressed Capital Rotary members Feb. 5.  Loftis (shown in photo) is responsible for managing, investing and retaining custody of nearly $50 billion in public funds.  He said state government is “doing well” financially, but he remains vigilant to “see that we are good stewards of your money.”  For instance, Loftis praised the SC Department of Transportation for “doing more work at less cost than ever before.”  But he warned that some nonprofit entities tied to corporate (instead of local) interests are getting public funds for services that state agencies and employees could provide more economically.  He said some $450 million is awarded to nonprofits, but in some cases “we don’t know what good they do for how much.”  Loftis was first elected treasurer in 2010.  A 1981 graduate of the University of South Carolina, he is a member of the Cayce-West Columbia Rotary Club.  Loftis has held leadership positions in numerous state, regional and national fiscal authorities and associations. 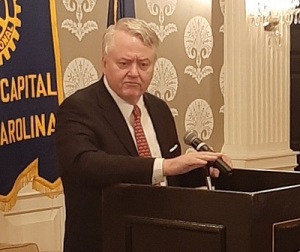