Four Capital Rotarians have been recognized for their donations to The Rotary Foundation in support of international programs promoting peace and world understanding.  They are (from left in photo) Alex Serkes, a Paul Harris Fellow (donation of $1,000); Daniel Winders, a benefactor (pledging a $1,000 donation from his estate); Daniel Moses, also a benefactor; Frank Rutkowski, a Paul Harris Fellow plus-three giver (signifying an initial $1,000 donation with three additional gifts in the same amount); and Philip Flynn, club president.  Capital Rotary members made nearly $13,000 in charitable contributions to the Foundation in the past year. 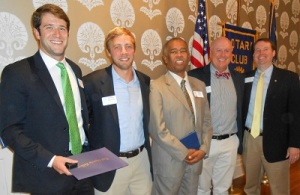 South Carolina treasurer Curtis Loftis briefed Capital Rotary members on his role as the state’s “private banker” when he served as the club’s guest speaker Aug. 1.  Loftis said his office manages, invests and maintains custody of tens of billions of dollars in public funds.  As “the taxpayer’s friend,” Loftis said he is committed to transparency and accountability in improving cash flow and eliminating fraud, waste and abuse.   He touted the success of the Unclaimed Property Program that has returned more than $137 million in unclaimed funds to state residents.  Loftis also praised growth in South Carolina’s Future Scholar 529 College Savings Plan, where he has overseen an increase in the number of enrollees to 145,000 accounts and total assets of $3.34 billion.  A 1981 University of South Carolina graduate, Loftis is a member of Cayce-West Columbia Rotary and serves on a number of state and national boards and commissions. 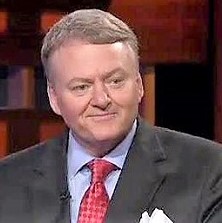 Outgoing Capital Rotary Club president Blake DuBose presents the 2018 Rotarian of the Year plaque to public relations chair Pete Pillow (left) in recognition of his dedicated service and loyal devotion to the ideals of Rotary.  Pillow, a retired journalist and public information officer, joined Capital Rotary in 2006.  He’s been a Rotarian since 1980 and is a past president of clubs in Beaufort and East Spartanburg.  He’s also a past president of the SC Chapter of the National School Public Relations Association and a College of Charleston graduate.

Capital Rotary members got the “straight poop” about Riverbanks Zoo’s composting success from guest speaker John Davis on May 16.  Davis (left, in photo with Rotarian Bud Foy) said the “bottom line” is that animal manure can be a profit-maker instead of a wasted byproduct.  He holds a degree in wildlife biology from Kansas State University and has run the composting program since 2009 as Director of Animal Care and Welfare at Riverbanks Zoo and Garden.  The zoo must contend with about 1,200 pounds of excrement daily, mostly from its elephant, giraffe and zebra populations.  After collection, the manure decomposes and cures in a special storage area while being monitored for temperature and moisture.  When it reaches the stage where it’s ready to be called “natural soil amendment,” the compost can be distributed at Riverbanks Garden and sold.  It’s available for gift shop purchase or by the pick-up truckload during spring and fall bulk sales.  Some of the sale proceeds go to the zoo’s conservation fund that supports projects to save wildlife and wildlife habitat all over the world.  Each year Riverbanks converts 13,418 cubic feet of dung into money-making compost.

Gubernatorial candidate James Smith (in photo with Rotarian Gloria Saeed) says South Carolina needs “smart government” to move forward responsibly and promises to deliver that if he’s elected.  Smith, currently a state representative, is running in June’s Democratic primary and was Capital Rotary’s April 18 guest speaker.  He addressed three main topics: (1) need for a state energy policy that “drives efficiency” on the part of utilities and promotes solar power – where South Carolina is “15 years behind other states” making progress; (2) supporting and improving public education, which he called a governor’s “number one job” because “education equals jobs” for our work force; and (3) reapportionment of Congressional and state legislative districts after the 2020 census, which Smith said offers a chance to remedy “30 years of gerrymandering” that’s led to partisan politics where “party is more important than government of, by and for the people.”  Smith, a Columbia native with undergraduate and law degrees from the University of South Carolina, was first elected to the SC House in 1996. 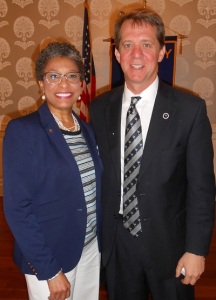 Richland County and the City of Columbia need to focus on growing more career jobs, not just adding to the area’s store of hourly-wage work.  Carl Blackstone, president and CEO of the Columbia Chamber of Commerce, delivered that message to Capital Rotary at the club’s March 21 meeting.  Blackstone (shown talking with Rotarian Ann Elliott) said strong private sector leadership is key in addressing what he called a local economy that “putters along.”  As examples, he cited (1) Richland County’s 5% population growth from 2011-2016 – compared to 11% growth in Charleston County and 9% for Greenville County – and (2) Richland’s -2.6% job growth rate during the same period versus 26.2% in Charleston and 8.3% in Greenville.  Disincentives for doing business in Richland and Columbia include the highest industrial tax rate in the country and commercial property taxes that are 8th highest in the country, Blackstone said.  He said the chamber believes in Columbia’s potential, but the public and private sectors must “move forward together” to meet economic and employment challenges over the next 20 years.  Blackstone’s background includes extensive government relations experience at state, local and federal levels.  He has a business degree from the College of Charleston and is a graduate of Leadership South Carolina. 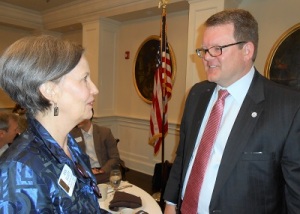 Today’s technology is a strategic asset companies can use to differentiate themselves from the competition, but a business not on board with this philosophy may not survive the future.  That’s what Capital Rotarians heard from their March 7 guest speaker, John Eckstrom, Carolina Business Equipment president and CEO.  Eckstrom said technology’s marketplace impact includes (1) social media – where two-thirds of the earth’s 3½ billion connected people are on Facebook; (2) Twitter – allowing mobile access to information at up-to-the second speed; (3) cloud computing – that lets users store data elsewhere and retrieve it via the internet from any device; and (4) big data – where companies can analyze their information to look for hidden patterns, correlations, market trends and customer preferences.  As these “converging technologies” continue to be applied in the business world, Eckstrom said, “we don’t know where we’re going because we’ve never been there before.”  In addition to his career at Carolina Business Equipment since 1994, Eckstrom also serves as president-elect of the Business Technology Association, an organization for office technology dealers nationwide.  (ChannelPro Network photo) 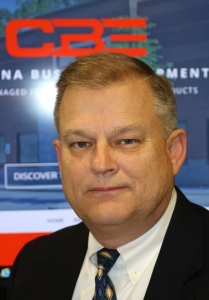 Homeschooling is a good option for parents seeking one-to-one, individualized learning opportunities for their children.  That’s what Capital Rotarians heard when Beth Martin – high school director for the South Carolina Association of Independent Homeschools – spoke at the club’s Jan. 24 meeting.  Martin is a former public middle school teacher who homeschooled her own three children.  She said the state association – a nonprofit founded in 1990 – works to ensure accountability for some 22,000 to 33,000 homeschoolers across South Carolina.  That includes assistance with curriculum, counseling and class schedules; meeting test requirements; maintaining transcripts and issuing diplomas; providing for special needs students; and college/career planning.  Martin said homeschooling can offer young people a superior education – aligned to their own specific needs, learning styles, personalities and interests – at less cost than a private or public school setting.  (SC Assn of Independent Home Schools photo)

Westwood High School principal Dr. Cheryl Guy told Capital Rotarians that she achieved a 30-year dream when she appeared as a contestant on the game show “Jeopardy” earlier this year.  Guy, the club’s guest speaker Dec. 20, started her “Jeopardy” quest in 1986.  A successful audition in Charleston – her fourth try over the years – resulted in a trip to Culver City, CA for videotaping in September 2016.  Her “Jeopardy” episode aired in January 2017.  She was the top winner that day with a prize of $20,600, but lost to another contestant in a subsequent appearance.  Her total winnings were $22,600.  Guy noted that the daily syndicated “Jeopardy” is TV’s top quiz show, attracting 23 million viewers a week and winning a record 33 daytime Emmy Awards.  Since its premier in September 1984, the program has been hosted by Alex Trebek (in photo with Dr. Guy).  Guy, a 1984 University of South Carolina graduate, worked at Camden High and at Spring Valley High before moving to Westwood when it opened in 2012. (Photo courtesy Jeopardy)

Community engagement and educational programs help the SC Philharmonic keep classical music alive, fun and relevant in the Midlands, according to music director Morihiko Nakahara, Capital Rotary’s guest speaker for Nov. 1.  Nakahara (shown demonstrating a conductor’s baton signals to the orchestra) has promoted interactive and outreach efforts since joining the Philharmonic in 2008.  Some of the most successful include (1) “Conduct the Phil” – an open podium where spectators take their turn leading groups of string players at public events; (2) concerts, youth orchestras and in-school programs to spark students’ passion for music; and (3) a “healing harmonies” project that sends Philharmonic musicians to area healthcare facilities to assist in “soothing the soul while the body mends.”  Nakahara says outreach is necessary to “break down the barrier between musicians and the community at large” so the Philharmonic can continue to perform and promote high-quality symphonic music. 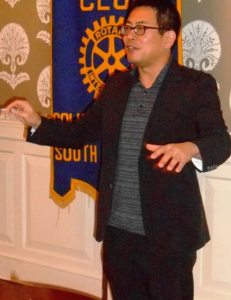