Goodwill Industries in South Carolina’s upstate and midlands is successful in putting people to work, true to the organization’s 1902 founding philosophy that it gives a “hand up” instead of a “handout” to potential members of the labor force.  Mike Daniels (shown in photo with Rotarian Felicia Maloney) was Capital Rotary’s April 10 guest speaker, reporting that one out of every 200 workers in the nation has been helped by Goodwill services.  Operating in 16 counties in the Palmetto State, Goodwill receives over 1.2 million “gently used” items at its donation centers.  These are then sold – the tune of 3.5 million purchases in 35 Goodwill stores – with 93 cents of each dollar received going to programs that include training and certification, job assistance for veterans and persons with disabilities, and job placement.  Daniels said Goodwill last year helped 12,152 people find jobs – and their first-year earnings could generate a potential economic impact of more than $149 million in the state.  Daniels has over 27 years of experience in labor market and workforce development in state government and in the private sector.  He’s now managing two grants for Goodwill’s Senior Community Service Employment Program aimed at refreshing job skills for more than 320 citizens aged 55 and above. 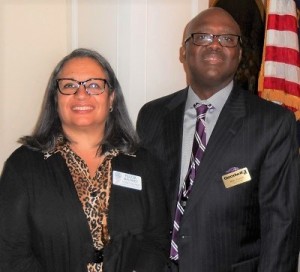