District 7770 Assistant Gov. Eric Davis (right in photo) has honored Columbia’s Capital Rotary for 2017-2018 donations to The Rotary Foundation, the international service club’s charitable arm for programs promoting peace and world understanding.  The honors include (from left in photo) current president Philip Flynn holding a certificate for contributions to End Polio Now, the global partnership that has contributed more than $1.6 billion toward polio eradication since  1988; immediate past president Blake DuBose holding a 100% Foundation Giving banner for clubs that average 100% participation with an average of $100 in per capita giving; and past president Tommy Gibbons holding an Every Rotarian, Every Year banner for clubs that achieve a minimum Annual Fund contribution of $100 per capita during the Rotary year.  Rotary District 7770 includes 80 clubs and about 5,000 Rotarians in 25 eastern counties of South Carolina. 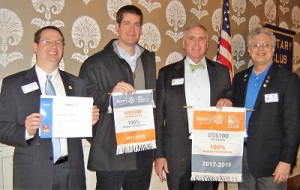